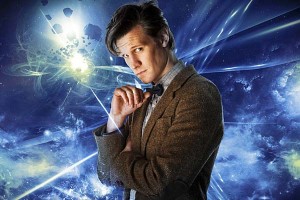 The BBC’s Doctor Who is regarded as the longest running and one of the most popular science fiction television series of all time. The series, famous for its long standing tradition of replacing actors who portray The Doctor to keep the series fresh, has been a perennial favorite of both genre fans and anglophiles abroad for its high adventure and cheeky humor. Its illustrious run has seen various conflicts, companions, and a total of 12 different actors portraying the doctor.

Initially an unlikely choice due to his relative youth compared to previous actors who have helmed the Tardis, Matt Smith’s portrayal as the Time Lord garnered the series an even more fervent fan base and its first ever BAFTA award nomination for Best Actor in 2011. The chemistry shared by his on screen companions Karen Gillan and Arthur Darvill endeared this pairing to audiences new and old alike.

Throughout his tenure as The Doctor, Smith brought a unique perspective to the character saying, “The Doctor is excited and fascinated by the tiniest of things. By everything. By every single thing. That’s what’s wonderful about him as a character. It’s why children like him, I think. Because he doesn’t dismiss anything. He’s not cynical. He’s open to every single facet of the universe.”

Although Smith’s run as The Doctor ended recently with the landmark 800th episode titled “The Time of The Doctor,” it’s assured that his time as The Time Lord will have a lasting impact on the series and be remembered fondly by fans for quite some time.

Matt Smith can next be seen in Ryan Gosling’s directorial debut, How to Catch a Monster, due for release in theaters later this year.

Posted in Blog
Call or E-mail for Personal Appearance Availability