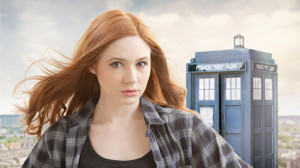 Never long without a companion in tow, the BBC’s Doctor Who is typically accompanied by a person (or persons) to help battle evil and stop injustice throughout time and space. While most companions have been more reactionary than take charge, it took the ambition of a young actress from Scotland to bring a new twist to this old motif.

Before garnering worldwide recognition as one of The Eleventh Doctor’s companions, Karen Gillan landed a recurring role as a member of the ensemble cast for the sketch comedy show The Kevin Bishop Show. It was on the Kevin Bishop Show that she honed and developed a comedic range and diversity, portraying such well-known figures as pop star Katy Perry and Angelina Jolie.

Gillan began her role as The Eleventh Doctor’s first companion during the revived show’s fifth season. Gillan’s character arc was one of the most complex in the series’ history, seeing her from a young girl to a mother. In the series, Matt Smith’s Doctor first encounters Pond as a very young girl, only to later return to her some 12 years after their first meeting to invite her as his companion.

Gillan saw the relationship between her character and The Doctor as one of a brother-sister type. Gillan recognized that past companions seems to have little to do when The Doctor wasn’t around and felt the need to inject her character with a certain confidence and adventurousness lacking in previous companions, “Amy’s a sassy lady, funny and passionate, and her relationship with The Doctor has a really interesting dynamic.” Gillan ended her run as Amy Pond on the series at the end of its seventh series, saying that she wanted to go, “on a high when the character was at her prime.”

Since leaving Doctor Who, Karen Gillan has enjoyed a thriving film and television career. Gillan was most recently seen by American audiences on the Adult Swim television series NTSF:SD:SUV:: during its November 2013 season and can next be seen as the character Nebula in Marvel’s hotly anticipated “Guardians of the Galaxy,” due for release August 2014.

Posted in Blog
Call or E-mail for Personal Appearance Availability