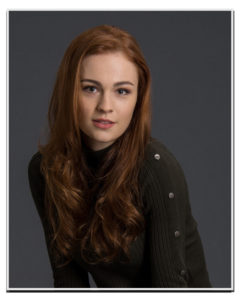 Sophie Skelton is a British actress who is most famous for her current role as Brianna Randall Fraser, the daughter of Claire and Jamie, in the BAFTA-winning, Golden Globe and Emmy nominated series Outlander.

At age of three, Skelton started to train as a ballet dancer and later continued her education at the Royal Academy of London. Her first on-screen performance happened when she was spotted by an agent at 15 and got her first role in the British drama Dci Banks. She made her movie debut in The War I Knew (2014).

Skelton got her first lead role on the bigger screen in the fantasy/horror movie Blackbird (2016) and her breakout role, in the British fantasy action-adventure series Ren: The Girl with the Mark. In 2018  Sophie was named by Variety Magazine as one of the ‘Top Ten Brits to Watch’.