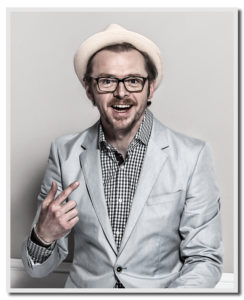 Simon Pegg co-wrote and co-starred (as Tim Bisley) in the worldwide acclaimed, cult television show Spaced. After two groundbreaking seasons, he moved on to develop and co-write, with Edgar Wright, the critically praised Shaun of the Dead, starring as the eponymous hero, Shaun. The film has since been voted one of the Best British Comedies ever made by many, including Empire magazine and Channel 4.

After conquering zombies, award ceremonies and the USA, Pegg and Wright reprised their debut movie success with the smash-hit follow-up feature, Hot Fuzz, in which Pegg starred as über cop Nicholas Angel. Pegg then went on to star in the David Schwimmer-directed feature film, Run Fatboy Run, and as the anti-hero, Sidney Young, in How to Lose Friends and Alienate People, alongside Kirsten Dunst and Jeff Bridges.

Simon co-starred, with Nick Frost, in their co-written feature film Paul- with cast including Seth Rogen and Sigourney Weaver. Most recently Simon and Nick starred together again in the incredible, The World’s End (which Simon co-wrote with Edgar Wright). Since then Simon has filmed two independent feature films: Kill Me Three Times and the title role in Hector and the Search for Happiness.

Simon stars in the iconic role of Montgomery Scott (“Scotty”) in J.J. Abrams’ highly acclaimed reboot of the Star Trek films , as well as starring as Benji Dunn in the worldwide smash hit Mission: Impossible III, Mission Impossible – Ghost Protocol, and follow up, Mission Impossible Rogue Nation (the 5th in the feature series).

Other notable credits include starring in (and executive producing) the cult film, A Fantastic Fear of Everything and co starring in Steven Spielberg’s The Adventures of Tin Tin: The Secret of the Unicorn; John Landis’ Burke & Hare – and voicing ‘Reepicheep’ in The Chronicles of Narnia: Voyage of the Dawn Treader, and ‘Buck’ in Ice Age 3: Dawn of the Dinosaurs.

Simon’s debut book, Nerd Do Well, is published by Century.