Posted on September 23, 2019 by bookcelebrities 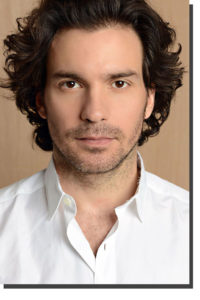 Santiago Cabrera is a classically trained Chilean actor, known for his roles as Isaac Mendez in the television series Heroes, Lancelot in Merlin and as Aramis in the successful BBC series The Musketeers.

The middle child in the family of a Chilean diplomat and his wife, Santiago was born in Caracas, Venezuela and grew up mainly in London but also Toronto, Madrid and Romania. The family returned to Chile when Santiago was 15. This early travel helped him become fluent in Spanish, English, French and Italian. Santiago excelled at soccer, being made captain of his high school team.

His school drama teacher convinced Santiago to try acting and while in high school he played the role of Mozart in Amadeus. Santiago attended two Chilean colleges on soccer scholarships before deciding to take a year away in Europe, playing semi-pro football in London before focusing on acting and entering the prestigious London Drama Centre in September 2000.

Concurrent with his final year at the Drama Centre, Santiago made his debut with small roles in British television, and on the London stage, playing Montano in Shakespeare’s Othello and on BBC’s Spooks (MI-5).

His film credits include playing the lead role of Father Vega in the historic epic Cristiada (For Greater Glory) opposite Andy Garcia and Peter O’Toole, and in Steven Soderbergh’s film, Che: Part One opposite Benicio del Toro, for which he won critical acclaim for his portrayal of legendary Cuban guerrilla commander Camilo Cienfuegos. More than just a pretty face and equally adept at period epics or nuanced character studies, Santiago’s formidable talent continues to shine.

In 2016 Santiago worked with Mindy Kaling in an episode of her television comedy, The Mindy Project and completed production on the much anticipated limited series for HBO, Big Little Lies, co-starring Reese Witherspoon and Nicole Kidman.  Big Little Lies aired on HBO Sunday nights 9 PM beginning Feb. 19, 2017 and is currently available on DVD. Big Little Lies has racked up dozens of awards including numerous Emmys including Best Limited Series Drama.

In February 2017, Santi signed on to star in Salvation, a thriller TV series for CBS. He plays a billionaire tech genius, Darius Tanz, who discovers an asteroid is about to hit the earth and must find a way to stop it. Season 2 aired in the U.S. on CBS in Summer 2018. Seasons 1 & 2 of Salvation is currently available on Netflix in international territories and on DVD, as well as available on CBS All Access in the U.S.

In March 2019 Santiago signed to appear in the new ‘Star Trek’ Jean-Luc Picard series on CBS All Access, reuniting with Alex Kurtzman’s Secret Hideout and CBS Studios for a co-starring role opposite Patrick Stewart.  CBS All Access’ upcoming Star Trek series will explore the next chapter of Jean-Luc Picard. The series will be produced by CBS TV Studios in association with Secret Hideout and Roddenberry Entertainment and will air late 2019.

In 2008 and 2014, Santiago participated in Soccer Aid, a British charity football match in support of UNICEF, playing for the Rest of the World team. He has said that C.D. Universidad Católica of Santiago is his favourite team, however he remains a fan of Queens Park Rangers F. C. and was a mascot for the club as a child.