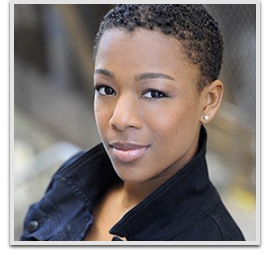 Samira Wiley (born April 15, 1987) is an American actress and model best known for playing Poussey Washington in the Netflix original series Orange Is the New Black.

When the Netflix television series Orange Is the New Black—based on Piper Kerman’s memoir of the same name about her experiences in a women’s prison—came into development, Wiley was told about the auditions by a friend from Juilliard, Marco Ramirez, who was a writer for the show. After discovering that another Juilliard friend, Danielle Brooks, had won a role in the show, Wiley asked Brooks to rehearse lines with her to prepare for her audition for the role of Poussey Washington, the on-screen best friend of Brooks’ character. Wiley’s audition was ultimately successful; she appeared in all twelve episodes of the series’ first season and was featured prominently throughout the second season. The darker and more violent plot of the second season allowed for the growth of Wiley’s character, whose evolved story lines lead to Wiley’s prolonged screen exposure and ultimate development as a “fan-favorite.” She was promoted to series regular for the third season.