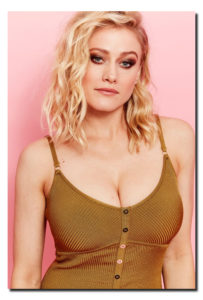 Olivia Taylor Dudley is an American born actress best known for her role as Alice Quinn on the SyFy series The Magicians (2015-). She landed her first major movie role in 2012 with the thriller Chernobyl Diaries, and continued in the horror genre with films such as The Vatican Tapes (2015) and Paranormal Activity: The Ghost Dimension (2015). Aside from The Magicians, Dudley’s television roles are numerous and include appearances on CSI: Miami (2011-2012) and Arrested Development (2013), as well as guest-starring opposite David Duchovny in the second season of NBC’s Aquarius (2016).