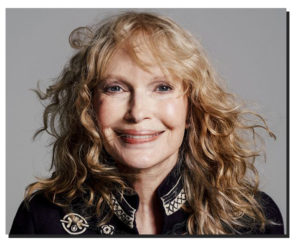 Mia Farrow is the daughter of the director John Farrow and the actress and Tarzan-girl Maureen O’Sullivan. She debuted at the movies in 1959 in very small roles and was noticed for the first time in the film Rosemary’s Baby (1968) by Roman Polanski. And again playing opposite Robert Redford as Daisy Buchanan, in The Great Gatsby (1974). She showed her talent also on TV and at the theatre, but her final breakthrough was when she met Woody Allen and became his Muse after the film A Midsummer Night’s Sex Comedy (1982). After that, Woody Allen wrote many other roles for her including The Purple Rose of Cairo (1985), Hannah and Her Sisters (1986) and Husbands and Wives (1992).

Since then, Mia has continued to act in movies and television, but has greatly turned her attention to humanitarian efforts. She became a goodwill ambassador for UNICEF in 2000, and has traveled on numerous missions to Africa and was particularly outspoken regarding the crisis in Darfur, even going on a highly publicized 12-day hunger strike in 2009.