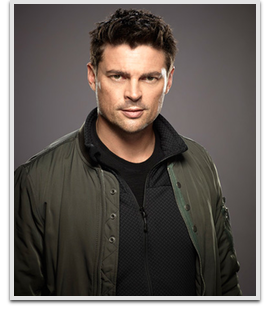 Born in Wellington, New Zealand on June 7, 1972, Karl Urban’s first acting role was at the tender age of 8, appearing on a New Zealand television series with only a single line of dialogue.

He put his acting career on hold following that appearance until he had graduated high school. He was offered a role in the NZ soap opera Shortland Street as he was preparing to attend Victoria University. After appearing on the series for the 1993-1994 season, he attended the university for one year, then left to pursue his acting career.

Over the next few years, Urban had established himself and his talents in the Wellington area’s theater scene. Eventually, he moved to Auckland, where a number of guest roles in NZ television followed. One of his first roles was that of a heroin addict in the drama series Shark in the Park. He was in a movie as well, entitled Once in Chunuck Bay.

Urban was also featured in The Chronicles of Riddick and the fan favorite film Pathfinder. 2009 saw Urban star as Dr. “Bones” McCoy in J.J. Abrams’ reboot of the Star Trek film series. He reprised the role in 2012’s sequel, Star Trek Into Darkness and will return once again in 2016’s sequel, Star Trek Beyond.

2012 also saw Urban star as cut comic hero Judge Dredd in the acclaimed film Dredd. From 2013 – 2014 Urban starred in the Fox television series Almost Human. He was next seen in 2014’s adult drama The Loft and also in the New Zealand production of the film The Rainbow. Urban starred alongside Bryce Dallas Howard and Robert Redford in Pete’s Dragon in 2016. In 2017 he joined the Marvel Cinematic Universe in Thor:Ragnarok which he played villain Skurge.

Most recently he can be seen in the new hit Amazon Prime Video series The Boys (2019) as one of the lead characters Billy Butcher.