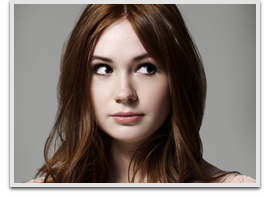 Karen Gillan is a Scottish actress best known to Doctor Who fans the world over for her role as Amy Pond in the British science fiction series Doctor Who. With her turn as the ever popular Amy Pond on Doctor Who having ended, Gillan set her sights on a role in the terrifying horror hit, Oculus. She was most recently seen in 2014’s most successful film, Marvel’s Guardians of the Galaxy, stealing the show as the nefarious Nebula. With the announcement of the sequel coming shortly before the film’s release, Gillan is set to reprise her role in the newly minted franchise’s follow up.

Returning to television screens in late 2014, Gillan’s first leading role on a US series came with ABC’s sitcom Selfie as Eliza Dooley, a women obsessed with the idea of achieving fame through the use of social media.

Posted in Doctor Who, Talent
Call or E-mail for Personal Appearance Availability