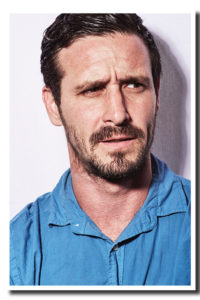 James Ransone is an American born actor who attended Carver Center for Arts and Technology in Towson, Maryland. He specialized in theater, then changed majors to fine arts and graduated in 1997. Ransone is known for his roles as Ziggy Sobotka in HBO’s crime drama series The Wire (2003), as well as United States Marine Corps Cpl. Josh Ray Person in the war drama miniseries Generation Kill (2008), and more recently as The Deputy in the horror films Sinister (2012) and Sinister 2 (2015). Slated to release in Fall of 2019, James will appear in IT: Chapter 2 the follow up to 2017’s IT, the highest grossing R-rated film of all time, as the grown up Eddie Kaspbrak.