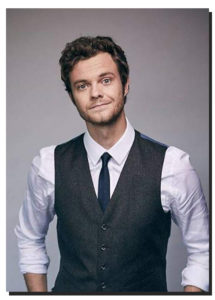 Jack Quaid is an American actor from Los Angeles, California. He is the son of actors Dennis Quaid and Meg Ryan, and made his acting debut with a minor role in the science fiction films The Hunger Games (2012) and The Hunger Games: Catching Fire (2013). Jack went on to have more roles on television as well as in the movies such as Logan Lucky (2017), and Rampage (2018). Most recently, he starred with Maya Erskine in Plus One (2019), a romantic comedy on Hulu, as well as the leading role of vigilante Hugh “Hughie” Campbell in the new Amazon Prime Video hit superhero series The Boys (2019).

Coming in 2020, you can hear Jack in a new animated addition to the Star Trek franchise, Star Trek: Lower Decks.