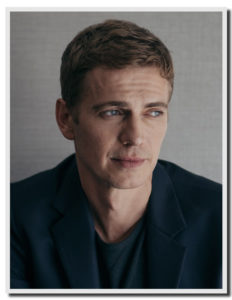 Hayden Christensen is a Canadian born actor best known for his role as Anakin Skywalker in the Star Wars franchise. His acting career started by a chance encounter at the age of eight which placed him in his first commercial, for Pringles. And by the time he was thirteen, he had starring roles in several dramatic television series.

His big break was a major part in the Fox Family Network’s Higher Ground (2000). On the series, Hayden showed off his acting talent as a teen who was sexually molested by his stepmother, and turns to drugs in despair. He later appeared in the television movie Trapped in a Purple Haze (2000) and had a role in the film The Virgin Suicides (1999).

On May 12, 2000, it was announced that Christensen would star as Anakin Skywalker in the prequels Star Wars: Episode II – Attack of the Clones (2002) and Star Wars: Episode III – Revenge of the Sith (2005). The star was chosen by director George Lucas because he felt that Hayden had raw talent and good chemistry with actress Natalie Portman.

His role as the troubled, misunderstood teenager Sam Monroe in Irwin Winkler’s Life as a House (2001) won him ‘Breakthrough Performance of the Year’ from the National Board of Review. The film also placed him as a nominee for ‘Best Supporting Actor’ at both the Golden Globe and Screen Actors Guild Awards. Hayden then starred in Shattered Glass (2003), quoted by some of the real Stephen Glass’ colleagues as giving an eerie and uncanny portrayal.

Since his Star Wars days, Hayden has headlined several action films, including Jumper (2008) and Takers (2010).