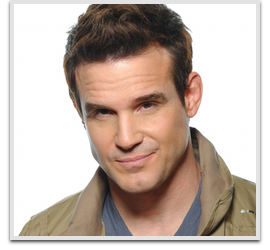 Eddie McClintock is a rare triple threat; handsome, dramatic and funny. After years of short lived network series, Eddie hit gold on “Warehouse 13”, SyFy Channel’s biggest ratings success in their history, as the unexpectedly amusing yet authoritative leading man, Pete Latimer, an FBI Agent assigned to oversee a secret government warehouse full of paranormal artifacts. Eddie continues to enjoy performing Guest Star duties and was recently seen on the new Rainn Wilson FOX series “Backstrom” as well as “Witches of East End” and “Modern Family”. He was also opposite Nathan Fillion in the 2014 Season finale of “Castle”. Be on the lookout for Eddie in the upcoming ABC series “Agents of Shield” and CBS series “Battle Creek” both airing in early 2015. Among his many television credits, McClintock was memorable in multiple episodes of “Bones”, “Friends” and “Desperate Housewives”

Prior, Eddie’s last on air series found him starring with Jane Curtin, Fred Savage and William Devane in the ABC comedy “Crumbs”. Before that, he performed with Neil Patrick Harris and Tony Shaloub in the NBC series “Stark Raving Mad” and Scott Foley in NBC’s “A.U.S.A”.

In his time away from TV and film sets, McClintock resides in Los Angeles where he lives with his wife and two sons.