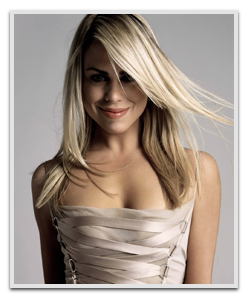 Singer, dancer and star of stage and screen, the multi-faceted Billie Piper has been entertaining audiences since her teens. She signed a recording contract at the age of 15 and released her debut single “Because We Want To” which shot straight to the top of the charts and made her the youngest ever artist to debut at number one in the UK singles charts. Following up with the success of her impressive debut, Piper released a follow up in 2000 with a sophomore effort “Walk of Life” before turning her efforts to a career in acting.

In 2004, Piper made several screen appearances in theatrical films such as “The Calcium Kid” and “Things to do Before You’re Thirty.” The roles offered a great change of pace for Piper and prepared her for what would become her most notable role yet.

With the long dormant Doctor Who series finally making its return to the BBC in 2005, Piper was cast as Rose Tyler, the companion to Christopher Eccleston’s Doctor for the first two seasons of the re-launched series. The success of the first two series was directly responsible for the resurgence in popularity of the Doctor Who brand, leading to greater exposure for the show as a whole as well as an audience in the US. Following the second series finale, “Doomsday,” Piper left the series as regular while making still occasional appearances on series specials.

Following her work on two made for television films airing on the BBC, “The Ruby in the Smoke” and “The Shadow in the North,” Piper landed the role high-class escort Belle de Jour/Hannah Baxter in the series Secret Diary of a Call Girl. Piper was lauded for her work on the steamy show and was nominated for Best Actress by Entertainment Weekly magazine during the series’ run.

Piper can currently be seen on the Showtime horror series, “Penny Dreadful” as Brona Croft, an Irish immigrant with a mysterious and dark past. With no signs of slowing down, Billie Piper continues to redefine who she is and what she’s capable of in front of the cameras.

Posted in Doctor Who, Talent
Call or E-mail for Personal Appearance Availability