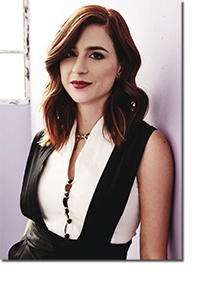 Aya Cash is an American actress and producer best known for her roles of Gretchen Cutler in You’re the Worst (2014-2019), Janet (Jordan’s Assistant) in The Wolf of Wallstreet (2013), and Joan Simon in Fosse/Verdon (2019). Most recently she can be seen as Stormfront in the new Amazon Prime hit superhero series The Boys (2020-2021).