Posted on October 2, 2019 by bookcelebrities 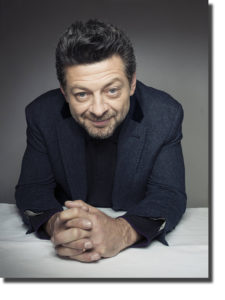 Andy Serkis is an actor, director and producer, known for roles such as ‘Gollum’ in the Lord of the Rings franchise, ‘Caesar’ in the Planet of the Apes films, ‘Supreme Leader Snoke’ in the latest Star Wars films, ‘Ulysses Klaue’ in Black Panther and many more. Andy has worked across the film, television and theatre industries, gaining awards and critical acclaim for his numerous roles including the BAFTA-nominated role ‘Ian Dury’ in Sex & Drugs & Rock & Roll.
‍
In 2012, Andy co-founded The Imaginarium – a Performance Capture studio and Production Company dedicated to the art and craft of next generation storytelling. In 2017, Serkis made his directorial debut with The Imaginarium’s first film, Breathe, followed by his next film as director, Mowgli: Legend of the Jungle, based on the original stories by Rudyard Kipling, which was released in December 2018.

Posted in Browse by Film & TV Series, Lord of the Rings, Marvel, Planet of the Apes, Star Wars, Talent
Call or E-mail for Personal Appearance Availability