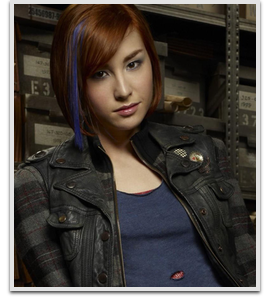 Allison Scagliotti is an American actress best known for her roles in Drake & Josh and SyFy television series, Warehouse 13.

Throughout her career, Scagliotti has had various television roles including appearances in One Tree Hill and CSI as well as Zoey 101. Scagliotti also had a recurring role on Drake & Josh and appeared in seven episodes from 2004 to 2008. She reprised her role in the spin-off movie, Merry Christmas, Drake and Josh.

Genre fans know Scagliotti best for her portrayal of the character Claudia Donovan in the SyFy series, Warehouse 13. Originally cast as a guest star, Scagliotti’s performance as Claudia Donovan proved to be so popular that initial appearance in the premier episode blossomed into regular appearances throughout the first season, leading to a being cast as a series regular through the rest of the series’ run. Claudia Donovan even crossed over to another SyFy series, Eureka, when she guest-starred in the season four episode “Crossing Over”.
Not limiting herself to the strange and supernatural worlds of Warehouse 13 and Eureka, Scagliotti also made an appearance as Jayna, the female Wonder Twin, in the 8th episode of the ninth season of Smallville and in 2011, she appeared in the feature film Losers Take All, set in the 1980s rock music scene.

Not just a star of film and television, in December 2012, Scagliotti appeared in Darren Caulley’s play Unhealthy. She played the lead role of Michelle, a struggling actress. Unhealthy premiered December 4 at HERE Arts Center in New York, NY.

In 2014, Scagliotti joined the advisory board of Sci-Fest, the first annual Los Angeles Science Fiction One-Act Play Festival, to be held in May 2014 and is currently working on a pilot for a series called “Stitchers,” about a young woman who is recruited into a secret government agency to solve murders.